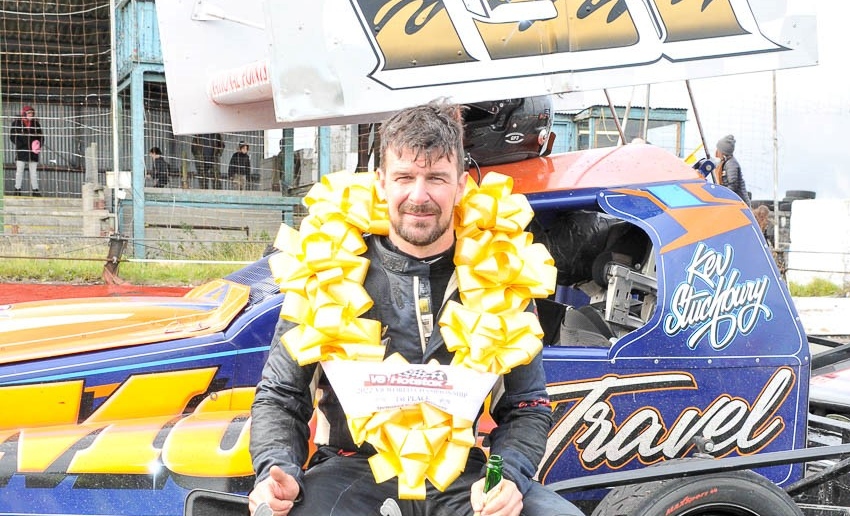 The end of an era

When the 2023 season dawns, it will be the 40th season of Hotstox racing. But the formula will celebrate its Ruby Jubilee without one if its glittering jewels.

The Hotstox formula has been garnished with many illustrious names over the years, Lomax, Wolfenden, Ainsworth, Chambers, Witts, Smith, Rogers, Fort, the list goes on – but in terms of the combination of race wins and championships, one driver stands above them all, and that driver is Kevin Stuchbury (131).

Racing for well over half of the formula’s seasons, current gold top Kevin, indicated at the start of the season that he would retire at the end of it. Some thought that regaining the gold roof might make him re-think that decision, but Kev has stuck to his guns and will hang up his helmet with the drop of the final chequered of 2022.

Kevin’s journey in the formula began in the late 90’s. There is evidence that he first raced on a day licence as #11 in 1997 (makes sense as they only needed to cover the “3” of Neil’s racing number), but neither Kevin nor brother Neil, can confirm this! What is clear though, is that he started in the formula as a fresh-faced 16-year-old with no racing experience at all. His early career was limited to occasionally racing Neil’s “other surface” cars and the first recorded race finishes were an impressive 7th and 3x 6th places at the Buxton staged Nationals in 1998. He would need to wait until 2002 for his first race win, when he took a heat win at Coventry on 1st June. Exactly 12 months later, Kev would record his first final win when he took the Buxton Cup on 1/6/2003, but he would only need to wait 6 days for his next feature win which was the Coventry staged Northern & Midland Rd1. From here Kevin firmly established himself at the top end of the sport. Indeed, he bagged his first major title that year when he topped the National Points list and took his first silver roof. Having won that title with just two heat wins and two final wins illustrates quite well what Kevin has had throughout his career, and that is consistency. He may not be the most spectacular driver out there, he may not win the most races in a season (though often did!), but the one thing you can rely on is that he will be there or thereabouts in the points tables because of his consistent high placings. That’s not to say that Kevin doesn’t win races – he most certainly does – in fact he has won more finals than any other driver in the formula’s history…. He sits second in the all-time list of overall race winners too, and currently sits on 203 race wins, 64 of which were finals. Only Ray Witts (180) has won more races (and not by many!) but Kevin has a couple more finals than Ray.

Having used brother Neil’s “other surface” cars in his early career, it was Neil stepping back from racing that really allowed Kevin to blossom, as the focus then moved to his career. The early years were Kevin learning the ropes on a part-time basis, and unlike some, he didn’t appear in a blaze of glory, but built his experience and track craft to the level he needed to be at the pointy end of the formula. Those within the sport will know of brother Neil’s passion for stock car racing and his involvement with the sport, from his own racing career to car building and sponsorship to currently chairing the V8 Hotstox board of control, and I’m quite sure that Kevin would want to recognise the input and assistance from his older brother.

As far as the big titles are concerned, Kevin has won them all multiple times. The National Points title has gone to the Buckinghamshire driver on no less than 9 occasions, his first being 2003. The gold roof has been on the 131 car 5 times, the first of which came in 2007 - only Mick Rogers (244) has won more golds, with 7 titles - but nobody comes close to Kevin’s tally of silver roof titles. He has taken the British title on 4 occasions and the European on 5. In fact, there are very few trophies within the formula that Kevin hasn’t had his hands on – and most of them more than once! Some of the only trophies that we can find that are not engraved with Kevin’s name are the Whites & Yellows Championship (he wasn’t in the lower grades long enough!) and the Under 25’s Championship (I reckon you can work out why!!??) In his final season, he seems to be mopping up some of the trophies he has not previously won, with wins in the Incarace Gold Cup and the Supreme Championship. Another trophy he has missed out on though, is the Bob Radforth Memorial, but as this is awarded to the final winner on World Final night, he is often not in the field having retired from the meeting with his gold roof!

Over his 25-year career, Kev has seen many drivers come and go. Some of us merely got in his way and made it slightly more difficult to get to the front of the field, others have stepped up to the plate and taken the challenge to him. Some came in a blaze of glory and some of them came out on top, but always very close was the 131 car – either on the track or in the points lists. Form is temporary, but class is permanent.

Some years have been more successful than others and I’m sure Kev would look back on 2007 and 2008 with great pride – ’07 produced a clean sweep of the major titles – Points, World, British and European – ’08 saw him defend them all, apart from the British…. that’s a dominant period in anyone’s book! He has been winning titles in the formula for 20 years, and retires as the current holder of both the World and European titles.

His Buckinghamshire home couldn’t really be considered as an ideal base for the spread of tracks in BriSCA-land over the last 2 and a half decades, but he was virtually a constant wherever the formula was racing – whether that was Cowdenbeath, Barford or Taunton. That commitment cannot be underestimated, and after 25 years of chasing points and titles all over the country, Kevin has more than earned his retirement, let’s face it – he has nothing left to prove and he, and his family, can now look forward to seeing a little more of each other on weekends!

So, as the curtain comes down on the most successful career the Hotstox has seen, I’m sure Kevin will be quite embarrassed by the fuss. He is a quiet, quite unassuming man and could well be described as “shy”. He just wanted to go about his business with the minimum of fuss - that business was winning – and he was quite good at it! Below is a summary of some of Kevin’s titles...

This is what we have on record, but sadly the records are incomplete. If you think you might be able to help fill some of the few gaps we still have in the formula’s history (particularly the mid 90’s), PLEASE get in touch – we would dearly love to dot all the i’s and cross all the t’s. We are looking for some results as well as allocations of some championships and even confirmation that certain meetings took place. Please plunder your resources and help us get this job finished, I can’t do it on my own! 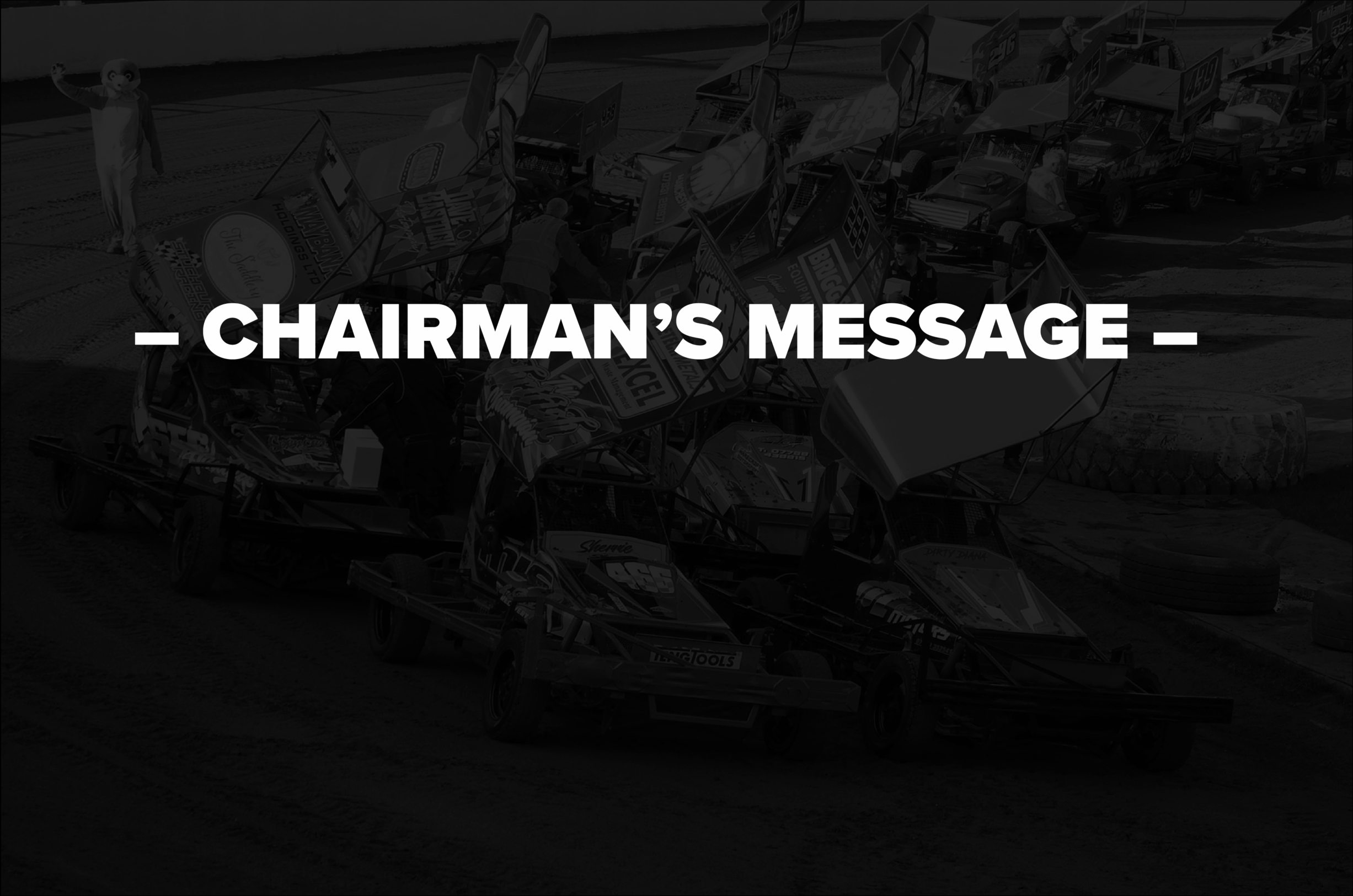 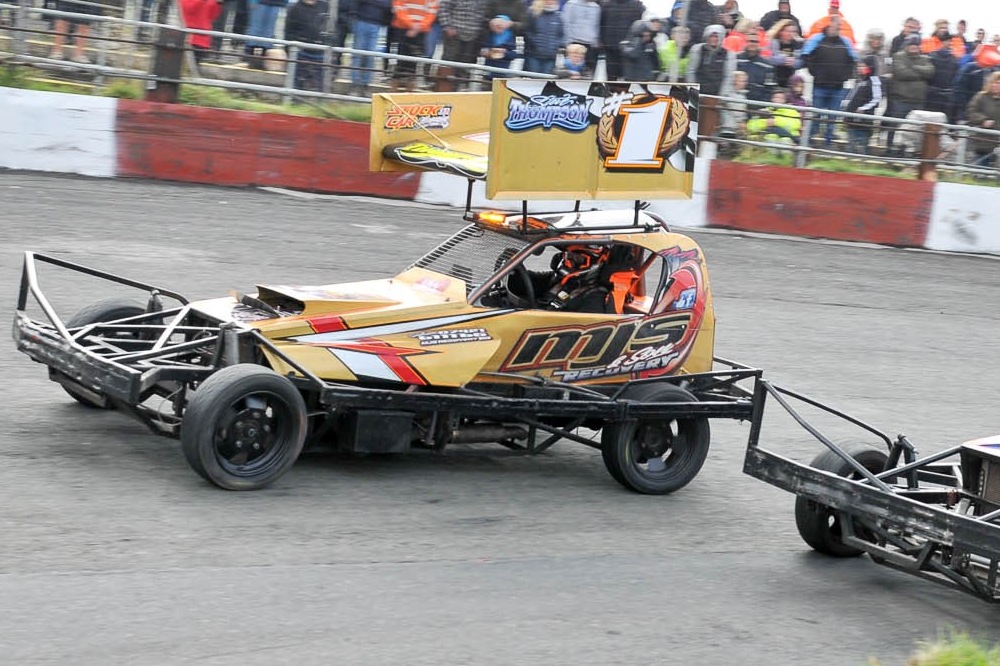